Rice enlisted  on the fourth Monday in July 1814 ( July 25th) at the Orange Courthouse as a private in Captain William Smith’s company of the Virginia Militia’s 1st Regiment, Crutchfield’s division. He was discharged on December 19, 1814 in Fredericksburg, VA without written documentation.    His brother, James F enlisted just days later in the same company.

And as it always happens when doing research, discovering Rice’s file leads us to more questions. For instance, there is a document from 1855 involving one of the Ohio land bounty claims given to Rice. It’s witnessed by Archibald Darnell.  He appears no where in our family tree, well at least that we know of yet! Is he a relative? Did he just happen to be in the office when they needed a witness and isn’t connected at all?  Always something more….

One of the challenges to documenting my Darnold ancestors  in the 1800s and earlier is that everyone seems to have just spelled names however they heard them. So there are many variations, all for the same family group. Take my 4th great grandfather Rice, for instance. I’ve found him as Darnel, Darnal, Darnell, Donald and even Daniel. Even his siblings have variations within the same documents!  By the time the name reached me, it’s now Darnold for my direct line.  Having lived in as many places as I have, I can easily hear the pronunciations of Darnell with varied accents.

Anyway, however it’s spelled or transcribed, there are lots of Darnell’s in Orange County, Virginia in the 1800’s.   But back to Rice.

Rice C Darnell is a very tricky man to hunt down.  Rice is the son of Moses Darnell and Frances Clarkson, born in about 1784 in Orange County, VA.  He married Mary “Polly” Ahart on Dec 25, 1804.   I suspect his middle name is Clarkson, following the tradition of naming first sons with the mother’s maiden name, but that’s just my hunch at this point.

Today I found muster cards and a pension record for him! There is just something about finding images of the actual paper that makes my heart sing.

Rice C Darnel War of 1812 Pension Record
But now there is another rabbit hole to explore. 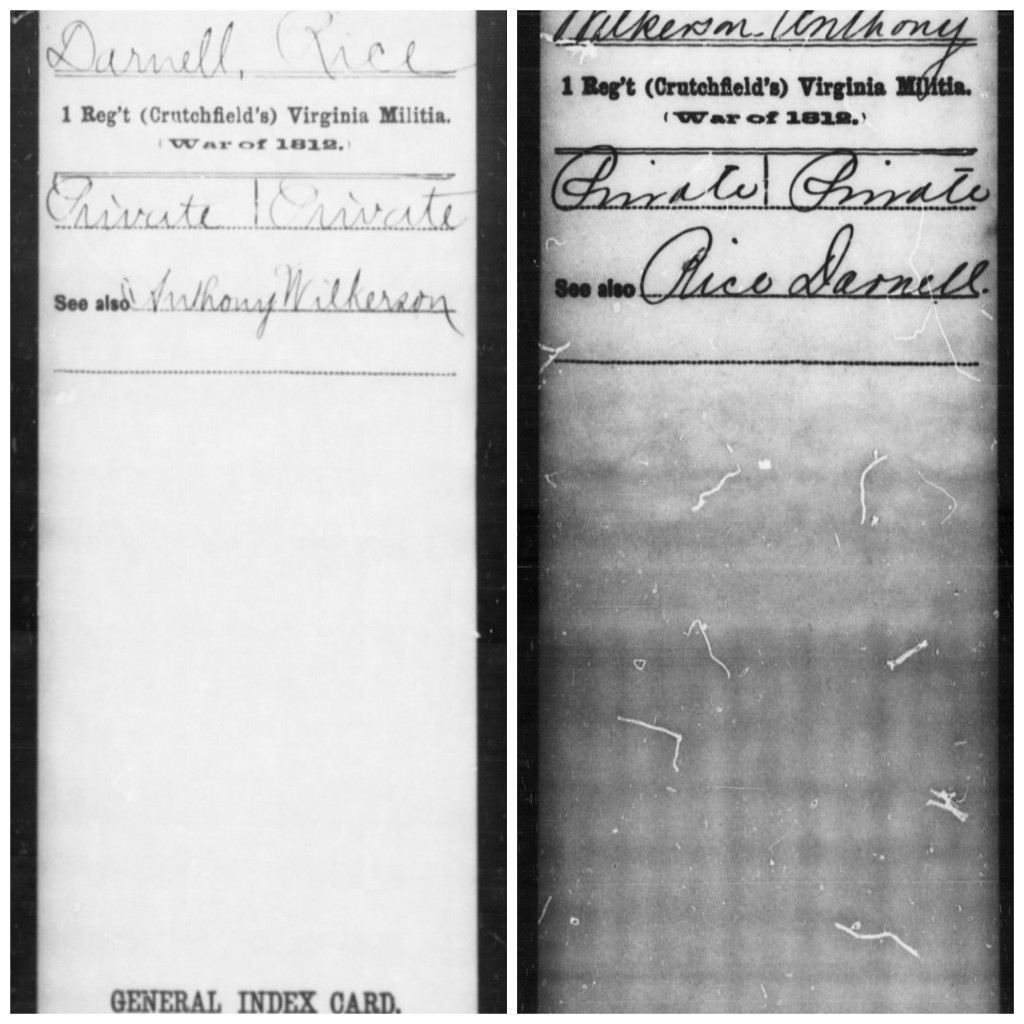 Who the heck is Anthony Wilkerson?  Is Anthony is a hired substitute?

Finding official records is a EUREKA! moment for me and every other genealogist. Today I found an image of the Orange County, Virginia Marriage Records 1757-1938 on Family Search.org. It’s hugely exciting because:
1. It verifies Dealen’s first name, something that has been somewhat difficult to do. It’s such an unusual name that for a long time I’d wondered if it hadn’t suffered some damage as a result of multiple gedcom uploads and merges in the decades before I became interested in genealogy. I’ve also seen her recorded as Helen Smith, which I can see as an easy transcription error. Now I have solid proof that even if it is a nickname, it is the right name!

2. I now have another ancestor’s name to search with. Her mother (my 4th great grandmother!) is Hannah Hensley. A notation next to Hannah’s name is “signed permission”, does this mean Dealen was underage or maybe that Hannah was illiterate and someone signed for her? Dealen is also listed as “Spinster”. I’ll have to see what I can find out about the use of spinster at that time.

3.The bondsman listed is Cypress Hensley. Another clue to work with’ Is he Hannah’s son, brother or husband? Is Dealen’s last name Smith because of a previous marriage of her mothers or perhaps her own?

4. The record also shows that Jacob Watts performed the marriage in St. Thomas Parish, Orange County, Virginia on December 24, 1809 and their marriage license was issued on December 21, 1809. This isn’t really a clue per se, just an interesting bit of info. I did find when I looked up Jacob Watts that performed many marriages at St. Thomas Parish and it lead me to a photo of the church. The church, as it turns out, is a key location in the rich history of Orange County Virginia.

Seeing how important this area is to Colonial and Civil War history, it’s started me on a new search… to find Garland Quinn’s military history. I’ve never seen anything, but I do know that my Darnold great grandfather of the same era was in Orange County as well and he served in the War of 1812. I’m betting I’ll find that Garland did too.

So I guess the location of their marriage turned out to be a clue after all.You just can’t dismiss any single bit of information in this ancestor hunting game.

Irish ancestry wasn’t ever a thought in my mind as I began my family research. Growing up I learned that our families were German, Scot, Czech , French and English, so discovering Darby Quinn, one of my 7th great grandfathers and an Irish immigrant was a delightful surprise. I immediately conjured up an image straight from a Little Golden Book I had as a child, Darby O’Gill and the Little People.

To the best of my knowledge, Darby Quinn arrived in Virigina about 1712, settling in Culpeper County, Virginia. In his will of 1754, he identified himself as a planter of Brumfield Parish in Culpeper County. It is signed with X “his mark”. No mention is made of his wife although two children, Richard Quinn and Elizabeth Bruce are named. My direct ancestor is Richard. The will has been archived at the Library of Virginia, transcribed and can be read  here.

Other documents located at the Davis and Shaw Families of North Carolina website help tell Darby’s story. We learn that his wife is Mary Ashworth, identified as his wife 10/21/1741 per DB 6, pg 272, Orange Co. VA. Residents of St. Thomas Parish, Orange Co. VA. Deed witnesses were John Quinn, George Taylor and Thomas Jones. I don’t know who John Quinn is at this point, perhaps a brother or uncle?

In 1747, the Quinn family was living in Orange County Virginia. I have many families in this area.  A recorded deed shows Darby giving a large gift to his daughter, Elizabeth.

Deed of Gift to Elizabeth per DB 10, pgs 517-18; Orange Co. VA; dtd 7/23/1747.
Know all men by these presents that I, Darby Quinn of Orange County, do by these presents for several good Causes and consideration and for the love and goodwill me thereunto moving Give Grant bargain make over and confirm unto my well Beloved Daughter Elizabeth Bruce all and singular the parts and parcels of my Estate as follows: (viz) Negro Robin and Negro Jane and all the time of service hereby indenture of a … woman named Catherine McCoy, nine head of cattle, one mare, one horse, four head of sheep, sixteen hogs one featherbed and furniture two iron pots one small chest one table and pewter dish one pewter bason two pewter plates two chairs one washing tub two pails one Great Bible two..axes one candlestick ten pewter spoons one raw hide one side of tanned leather one large bottle two Earthen Muggs seven mislings of bason, sixteen hundred pounds of Tobacco twelve barrens of Indian corn two geese one handsome great augre one spinning wheel ten pounds of cotton unspon one iron pestle one iron … one grubing hoe, two weeding hoes two hilling hoes one frying pan one fine wheat sive one coarse sive one plough hoe one iron chair one pint bottle one iron form one brick band three case knives and forks one cotton and Haymes one rendering (?) tub, four bushels of rye, four wooden noggins, one pepper box, which said above Negroes, good and chattels, I give to my daughter Elizabeth Quinn with all the Increase for the future of the said negroes same with all the future increase of the above said cattle and all the future increase of the said mare to have and to hold the said Given and Granted Negroes, Good and Chattels to her by said Daughter Elizabeth Bruce her heirs and assigns.

To have and to hold the same forever from me the aforesaid Darby Quinn my certain attorney or assigns forever.

In witness whereof I have hereunto sit my hand and seal this 31st day of March in the year of our Lord one thousand seven hundred and forty-seven.

Signed Sealed and Delivered
in the presence of us

My dad didn’t know this story. I think he would have liked hearing it.  I can see the twinkle in his blue eyes as I am telling it now. Just like Darby O’Gill dancing with the little people.